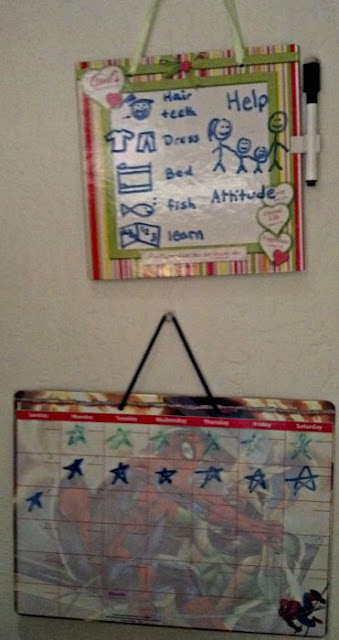 Lately my son has been having more of an attitude, being defiant, not listening, and whining much more! Maybe it’s a 5 and 1/2 phase (I keep hoping), but I can’t take it anymore! Especially since my youngest is Very good at being 2! I can’t deal with both of them being out of control! So I decided to try the reward chart again. Only for the oldest for now.
We did this for a while last year and it worked well, but we fell out of the habit of it. I remembered that it’s important for parents and child to be clear what is expected of them. I was often confused with changing rules and unfair expectations growing up and it led to anger and frustration for everyone! I don’t want that happening now, so this is what mine looks like (above).
The top white board shows a list of my son’s responsibilities every day, with a pic so he can remember them (he came up with most of the list):
Brush hair & teeth
Get dressed
Make bed
Feed fish
Learn (as a homeschooler, this covers any school work we do that day, you could put homework instead)
Help (this means go out of your way to be helpful to someone during the day as well as being helpful in general, such as cleaning up after yourself)
Attitude (includes having a good attitude about dinner, school work, and in general)
The bottom white board is a calendar where I put a star each evening if I feel each of his responsibilities was satisfied. I used to fill in the numbers of days each month, but it became too time consuming. Might be a good project for my son to practice writing his numbers and learning the calendar, though! There is a possibility of losing the star if he doesn’t cooperate with bedtime. I try to keep it positive though, “don’t you want to keep the star you worked so hard to earn today?” rather than threatening to take it away.
If he earns all his stars for the week he gets to do something special, such as a field trip! Of course it’s usually something I already had planned on going to, but he doesn’t need to know that! Shh!
We’ve been at it for two weeks now and so far it’s improved all of our attitudes, since I have to be the example and make sure I have a good attitude and go out of my way to help someone, too.