You are here: Home / Homeschool / To Not believe in gender stereo-types 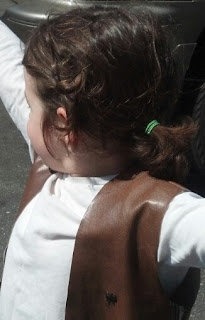 I had to share this story (link below). My son has long hair. He started growing it out to look like a pirate about a year or so ago. Now he’s really into Native American Indians, so he now tells me he’s an Indian. I love his hair! It’s thick, rich chocolate brown, with waves and curls. I wish I had hair like his! He’s always looked and dressed very boy-ish so has rarely been mistaken for a girl, though it has happened occasionally and more often, especially since he can just get his hair into a ponytail and stole my bobby pins to keep the sides from falling.

I absolutely love that he is comfortable with who he is and does not
gender stereo-type. He is totally accepting of all people, never
questioning what they are wearing, how they have their hair, etc. The only time I had an inner struggle about it was when he wanted his nails painted when his sister and I were painting ours. Do I paint them and continue to give him freedom of dressing how he wants? Or do I avoid his pain and humiliation when some mean person wants to make fun of him for it? At least he has not wanted to wear dresses so I haven’t had to think on that one. I would like to think I would not care, but I grew up in this society, too. I compromised and painted his big toes and one thumb green and he was happy with that. Even his dad was fine with that and he has a harder time accepting the long hair and some of his fashion choices. 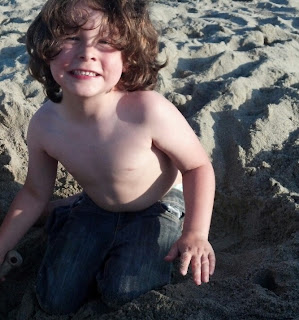 My son is homeschooled so has not felt the pressure to conform. The many other homeschooled kids we’ve met are all very accepting, some dressing pretty outrageously, and I just love to see their fashions and freedom of expression! It saddens me that so many kids go to school and are teased and bullied for being different (and I completely remember being the receiver of it). Aren’t we all different? Isn’t that what makes each of us wonderful and unique? So far my son has avoided most of these situations, but I know his innocence can’t last forever.

We’ve already come across some people, and all adults, that have asked him “if he likes looking like a girl?”, referring to his hair, or “Why he’s wearing a necklace or ___ that looks like a girls..” Luckily he didn’t seem to really take in what they were saying and I hope he always keeps in mind what this blogger’s daughter thought about them, that those people are just “stupid”.

At home my son will play with dolls, cook, dance, draw hearts and rainbows, wear a tu-tu when his sister is wearing one, eat off a pink plate, and do all the things that boys are supposedly supposed to do, as well. I hope he always keeps an open mind and hasn’t a care in the world of what others think he should look like or do.